Birding Station to Station is a fantastic birdwatching journey through six different life zones in Costa Rica. With your experienced, professional bird watching guide, you’ll explore the Caribbean Lowlands, the Talamanca Highlands, the foothills and valleys of San Vito, the Pacific foothills, and the transitional Central Pacific rain forest.

For any avid bird watcher, this exceptional birding adventure offers the chance to add many endemic species to your life list and if you’re a photographer, a chance to get your best shots of the top birds in Costa Rica.

Map of the “Station to Station” Group Tour 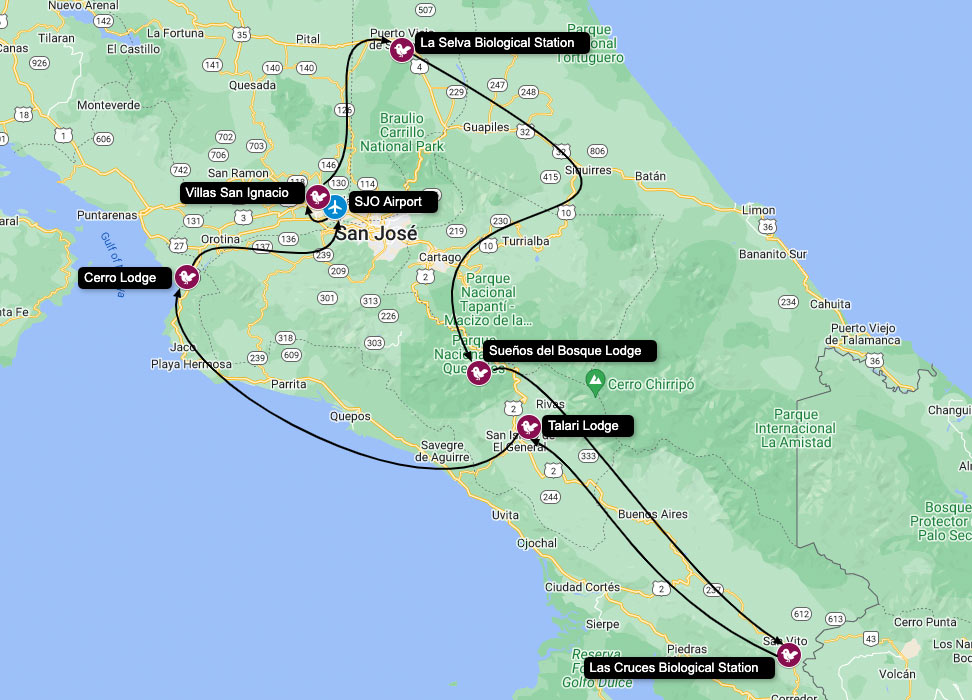 Welcome to Costa Rica! Your private driver will meet you at the San Jose International Airport and together you’ll transfer to your hotel for your first night in Costa Rica. Your guide will meet you at the hotel reception. The Hotel Villas San Ignacio is the perfect start to your journey with it’s lovely design and cozy ambiance. Your guide will stroll through the 1.5 km forested trails with you helping you find the top bird species of the area. The group will meet in the evening for a Welcome Dinner. 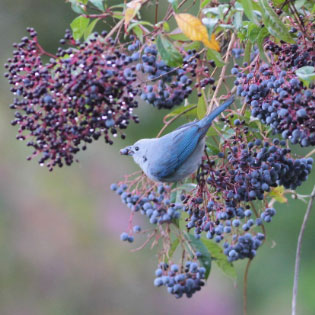 This morning, after an early breakfast, you’ll depart the Central Valley for the Caribbean Lowlands. En-route you’ll make a stop at the incredible Cinchona Feeders. Cinchona is a favored stop for bird watchers and photographers as it offers a chance to see hummingbirds, barbets, toucanets, and hummingbirds. The observation deck is a lovely place to have a hot cup of coffee and get an eye level view of many species of birds. You’ll enjoy lunch at Cinchona and then continue on to La Selva Biological station for check in.

This morning you’ll be up with the sun to start your exploration of the La Selva Biological Station trails. La Selva’s influence on tropical ecology is immeasurable. It has served as a key training and research site for numerous scientists in many fields of study. La Selva Research Station pioneered private forest conservation in Costa Rica, as it was the first of what is now a large network of private forest reserves in the country and provided a base for the study of all tropical flora and fauna.

The species richness of La Selva is outstanding, with more than 2,077 species of plants; 125 species of mammals (72 of them bats); 470 species of birds; 48 amphibian species; 87 species of reptiles; 45 species of freshwater fish; and tens of thousands of insects, arachnids and other arthropods.

You’ll spend all day exploring La Selva, with breaks for breakfast and lunch at the lodge.

Today after your morning birding and breakfast you’ll continue to Cope’s Gardens for a chance to see some fantastic birds, and meet a truly unique local bird lover and artist, the owner of Cope’s Gardens, Jose Alberto Perez.

Cope will take you through his garden paradise and you’ll visit all the feeders, the pond and the surrounding area. Cope knows where the Owls are roosting, where to find the Potoo, and all the other wonderful creatures that call his gardens home.

After Cope’s you’ll travel to the highlands of the Talamanca Mountains. Keep a sweater handy as you will feel the temperatures drop as you gain elevation.

You’ll stop enroute for lunch and reach your lodge for check in and some time for a walk around the gardens for your introduction to the highland species.

The Talamanca Mountains are a Tropical Cloud Forest area. Almost three-quarters of all the trees are White Oak. This lush, gorgeous forest is vibrant with bromeliads, mosses, ferns, and orchids. The air plants and epiphytes flourish in this cool, damp climate.

With a fantastic combination of highlands, middle elevation, and paramo, the area provides birders and bird photographers a wonderland of species to see and photograph.

San Gerardo de Dota is known as the most reliable place in the country to observe the Resplendent Quetzal, probably the most famous bird of Costa Rica and maybe of all of Central America. It is often found feeding in the wild avocado trees that populate the Savegre Reserve.

Today, after breakfast you’ll depart San Gerardo de Dota and gain elevation to explore the paramo area of Cerro de la Muerte. This unique region is the northernmost paramo in the world.

You’ll stop and look for the top species including the Volcano Junco, Volcano Hummingbird, Fiery-throated Hummingbird, Timberline Wren, Sooty-capped Chlorospingus, Peg-billed Finch, Black-billed Nightingale-Thrush, Black-capped Flycatcher, Barred Becard, Large-Footed Finch and Sooty Thrush. You’ll then travel south heading to the Pacific Lowlands and the San Vito Valley. You’ll arrive at the Las Cruces Biological Station for check in and with time to explore the grounds in the afternoon.

Your guide will give you an introduction to the area, and the top species of Las Cruces and Wilson’s gardens. You’ll have time for some bird watching before dinner this evening at the station.

Las Cruces Biological Station, which protects over 300 hectares of middle elevation forest also includes the incredible Wilson Botanical Garden. It was opened in the 1960s and contains more than 1000 species of plants. A great part of the garden are the bromeliads, orchids, bamboos, and heliconias, as well as the world’s second largest botanical collection of palms.

You’ll reach Talari Lodge for check in and then you’ll begin your birding on the lush forest trails that surround the Lodge. The lodge boasts 8 hectares of landscaped gardens, river frontage, primary and secondary rainforest. There have been more than 200 species of birds recorded at the lodge.

In 1941, Dr. Alexander Skutch, a botanist and naturalist, purchased the land that would become Los Cusingos Bird Sanctuary. The farm, which is named after the fiery-billed aracari, inspired Dr. Skutch to write more than 30 books and hundreds of papers on Costa Rica’s biodiversity and ornithology.

During his lifetime, Dr. Skutch made many contributions to the world of ornithology, including in-depth research of 300 species in the American tropics. Additionally, he investigated the area’s flora, and in the process discovered many new plant species. These discoveries can be identified by the second half of their scientific name – skutchii, in honor of Dr. Skutch.

Los Cusingos Bird Refuge has 1.2 miles of walking trails, which weave past several archaeological sites. One of the most important has pre-Colombian petroglyphs that are decorated with native art.

The refuge also has a small lodging facility with bathrooms, showers, and a communal kitchen. The bird sanctuary offers a great diversity, as it covers altitudes between 800 and 3820 meters above sea level. Visits also give guests the opportunity to walk in the footsteps of one of conservation’s heroes.

Today you’ll continue north along the Pacific Coastline, making your way to the transitional forests of the Central Pacific. You’ll arrive at your lodge in time to spend the afternoon exploring the gardens and trails with your guide.

The 500 acre private reserve includes primary and secondary forest plus a pristine river flowing alongside the hotel. Be sure to listen for the Scarlet Macaws, this area is the perfect place to spot them.

Carara National Park has the distinction of being the largest transitional forest in Costa Rica and one of the most important wildlife corridors in all of Central and South America.

This forest joins the dry tropical forest of the Northern Zone with the lush tropical rainforest of the Southern Zone of Costa Rica. The result is an amazing variety of birds, reptiles, mammals, insects, trees, and plants.

You’ll arrive early with your private guide and enjoy a full morning of birding at one of the most prolific parks in the country. You’ll return to the lodge for lunch, and a break during the heat of the day, then your adventure continues as you head to the Tarcoles river for the afternoon.

The unique location of the Tarcoles River and its easy and productive birding makes it one of the top birdwatching sites in all of Central America.

Your birding adventure has come to an end. Enjoy breakfast at your hotel and then prepare to depart for San Jose. Your guide will take you back to the San Jose International Airport for your International flight.