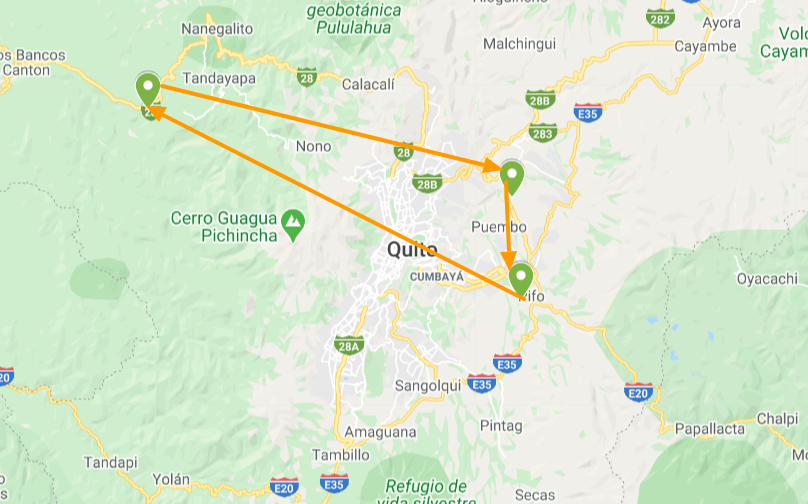 Today you arrive in Quito. Your driver will meet you at the airport and you’ll transfer about 30 minutes to your hotel. You’ll have time to relax and acclimate to the elevation and get your first look at the enchanting Ecuadorian forest. Your first night in Ecuador is at a 100+ year old Hacienda; a cozy, comfortable location, removed from the hustle and bustle of Quito.

Some of the rare species include the White-winged Brush Finch, Western Emerald, Shiny Cowbird and many others. The reserve has 23 private acres of trails and an Archeological Pre-Inca Tunnel dated from the 1400 ́s. From the trails you can also observe up to 10 Volcanoes including Cotopaxi – the highest active volcano in the world.

Antisana ecological reserve is home to a wide variety of flora and fauna. It lies in between the mountains and the beginning of the Amazon region and boasts a magnificent snow capped volcano (5,755m) of the same name. After taking in the unique atmosphere of the reserve we will reach the top of Milacoma (4,150m) peak. Although there are only approximately 50 to 75 Andean Condors left in Ecuador, this is one of the best spots in the country to see them. You will know without any doubt when you see one given their enormous wing span of 3 meters.

The Condor is not the only reason to explore Antisana. There are many different habitats along the way and an excellent birding stop at Lake Mica.

This morning you’ll head to one of the most impressive waterfalls and top birding spots in the Andes. It’s a beautiful day in the forest, searching for the top species of the area. Returning to the hotel you’ll drive South-East to one of the best reserves in the Andes in the River Pita Region. It’s an easy-moderate 4-hour hike along River Pita in the Avenue of volcanoes to bird watch and admire the natural landscape. We’ll be searching for 26 top bird species.

Some of the best birding is toward the end of the road where there are a couple sets of hummingbird feeders and some small tracts of forest. Yanacocha is a wonderful place to see high-elevation hummingbirds. Species commonly seen include Buff-winged Starfrontlet, Sword-billed Hummingbird, Great Sapphirewing, Sapphire-vented Puffleg, and Tyrian Metaltail. Less commonly seen hummingbirds include Shining Sunbeam, Mountain Velvetbreast, Golden-breasted Puffleg, and Purple-backed Thornbill. The road ends in a clearing and from there a short uphill walk leads to a small forest patch where it’s possible to see birds such as Barred Fruiteater, Spectacled Whitestart, and Superciliaried Hemispingus.

After completing the trails we will enjoy our lunch with a panoramic view of the Andean Slope and the Cloud Forest. We’ll continue birding in Old Nono Mindo Road and arrive in the afternoon to Alambi Hummingbird Paradise. A spectacular location for hummingbirds. From Alambi we’ll continue to the lodge for check in.

Today you will visit the famous Refugio Paz de Las Aves, a private cloud forest reserve and perhaps the most amazing bird show on earth. Walking along the forest trails, you will be searching for some of the most difficult forest undergrowth skulkers on earth, the Antpittas.

A number of years ago, the entrepreneurial Ecuadorians brothers, Angel & Rodrigo Paz managed to coax a number of mega species into view through the use of daily feeding rituals. One of the stars of the show is undoubtedly the goliath Giant Antpitta, which often approaches to within only a few feet.

Other specialities include Dark-backed Wood Quail, Ochre-breasted and Yellow-breasted Antpittas, Rufous-breasted Antthrush and Nariño Tapaculo as well as the more widespread species such as Sickle Winged Guan and Golden-winged Manakin.

You will also visit a lek with a regularly attending population of Andean Cock-of-the-rock, one of the gaudiest of all South American birds.

Along the way, you may find a fruiting tree attended by Crimson-rumped Toucanet, Scaled Fruiteater, the elusive Olivaceous Piha and the stunning Toucan Barbet.

You’ll break for lunch and then continue on to a visit to the San Tadeo Tanager Feeders. San Tadeo is a fantastic location to observe a wide array of Tanager species and other Choco-endemics.

Come experience this exceptional 100 hectare Chocó-lowland Bird Sanctuary and its ample trail system and 15 meter tall canopy observation tower. This important site, one of the last remaining accessible forest remnants found in this key life-zone, is situated in hilly lowland forest at an altitude between 300-350m. The main feature at Río Silanche is its incredible birding. With mixed species in foraging flocks, packed with many important Chocó regional endemic species, the visitors are bombarded all day long with a huge array of bird species.

You’ll break for lunch and then continue on to the Suamox Feeders.

Rancho Suamox is a private farm in the lowlands where the owner has set up both fruit feeders and hummingbird feeders that attract tanagers, woodpeckers, and a couple of different hummingbird species only found in the lowlands. Golden-olive and Black-cheeked Woodpeckers, Rufous Motmot, Dusky-faced, Flame-rumped, and Silver-throated Tanagers, Ecuadorian Thrush, Buff-throated Saltator, Thick-billed and Orange-bellied Euphonias, can all often be seen and photographed at the feeders.

After an early breakfast, we will visit the 23 of June Commnity, one of the only places to observe the rare Long-wattled Umbrella Bird. This community has protected the area for the last 30 years and switched towards conservation of the cloud forest. Explore the main trails that this birding reserve o ers. Lunch along the way and continue birding for possible Rufous Motmots in the Lek.

After an early breakfast, you’ll explore the Sachatamia Reserve, a private, ecological reserve exceeding 120 hectares of cloud-rain forest. In the morning you will visit the different birding trails and feeders around this reserve located in the Protected Forest of Mindo-Nambillo. After lunch at the lodge, we will continue birding in Milpe Birding Sanctuary and Manakin Leks.

Milpe is another key reserve of the Mindo Cloud Forest Foundation and is one of the best sites in the world to see the Chocó endemic Club-winged Manakin.

The adjacent Milpe Gardens has a great trail through mature foothill forest where we will continue to look for specialities.

This reserve is a privately owned, 130 hectares of recovering forest in the new protected important bird area (IBA) Mashpi-Pachijal. The specific location of this forest within this IBA makes it special because this area is the last foothill-forest that directly connects to the lower subtropical western forests of Ecuador. Its unique location makes it particularly attractive for birders looking for the highest biodiversity regions with choco endemic birds.

The reserve includes a small but nice hummingbird garden with a few well visited feeders that attract some of the sought after choco endemic hummingbirds like the Empress Brilliant, Velvet-purple
Coronet, Violet-tailed Sylph, Brown Inca, Purple-bibbed Whitetip, and White-wiskered Hermit.

Some of the local tanagers are also being attracted to feeders, so you will be able to see and photograph more of the choco endemics like Glistening-green Tanager and the Black-chinned Mountain Tanager. They also have other colorful tanagers that visit the feeders like the Golden-naped Tanager, Golden Tanager, Flame-faced Tanager, and others.

Last but not least there are other Choco endemics that can be seen in the reserve or along the road: Rose-faced Parrot, Orange-fronted Barbet,Toucan Barbet, Orange-breasted Fruiteater, Mossbacked Tanager, Choco Vireo, Long-wattled Umbrellabird.

Day 11: Return to the Quito Airport for your flight home or continue on to Galapagos